This past Saturday, I ran the Bayshore Half Marathon in Traverse City, Michigan. I signed up for this race way back in the winter, but its training took a bit of a back burner as I prepared for the Riverbank Run 25k which took place two weeks ago. I figured that since I was already training for a 15 mile race, running a half marathon a few weeks later would flow naturally.

Since the Riverbank Run 25k took place two weeks ago (on May 12th), I adjusted my recovery in order to simulate a few weeks of taper. Running was easy the past two weeks and it was nice to not feel guilty about running lower mileage! I completed a few low mileage runs after taking 4 full days off from running after the 25k. 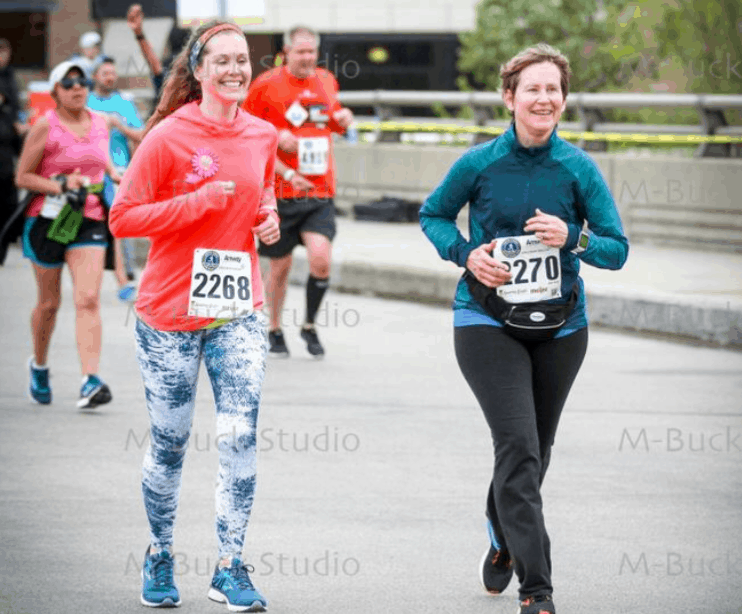 My husband and I headed up to the Airbnb we rented in Traverse City Friday afternoon. I ran the Bayshore Marathon in 2015, so I knew a bit of what to expect with the logistics beforehand which made everything so much less stressful. This time my husband ran the 10k with his friend while I ran the half! Since I had just run the full here three years ago, I was so surprised to see how much bigger the half marathon was.

Our friends picked up our packets for us and we cooked a spaghetti dinner in our AirBnb to carb load for the race. We went to bed early and everything went smoothly the night before! 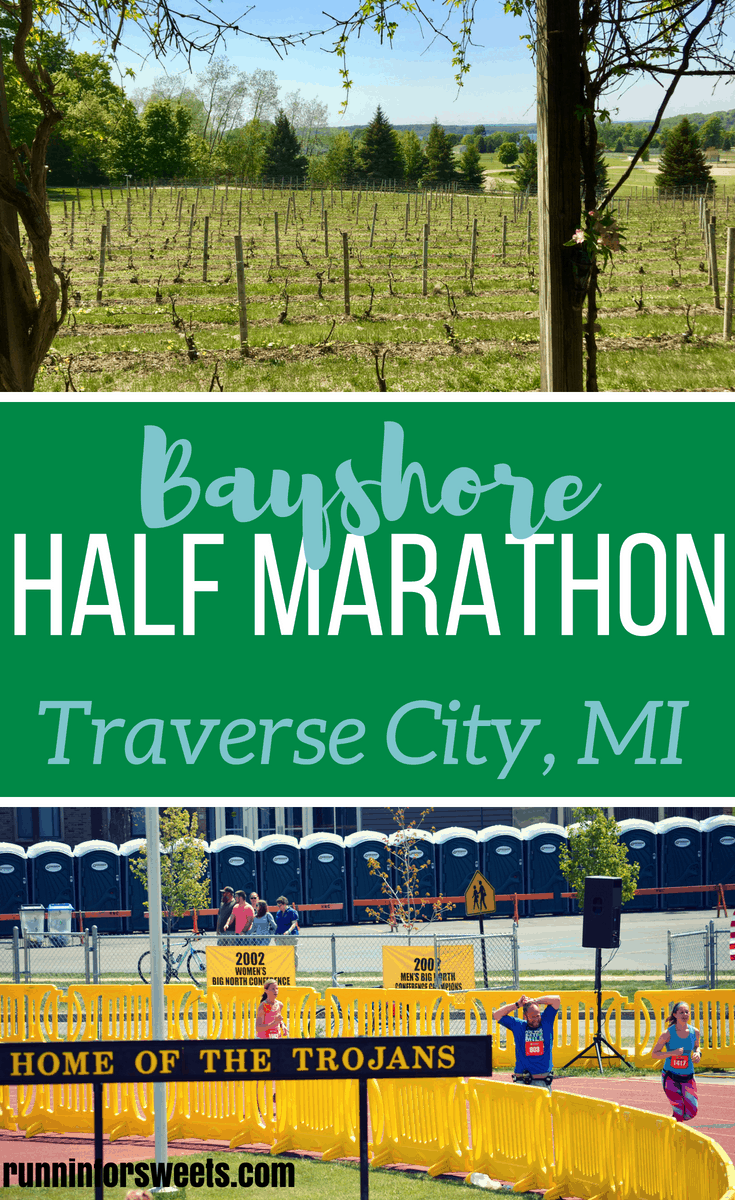 Race morning started out very easily. The townhouse we rented was less than 10 minutes from the start. The race ends just outside the high school on the track, where the full and 10k also start, but the half marathon starts 13 miles up the peninsula and then runs towards the school. The race offers school bus shuttling to the half marathon start but we lucked out and had a friend who was not running drive us to the start! Traffic getting to the school was pretty slow in the morning, but we left early enough that there was no stress.

We arrived to the start around 6:30 am, about an hour early. Once we got there we waited in line for the porta potties which turned out to be a great idea because about 15 minutes later the lines were huge! The starting line was so unofficial that it was almost comical – it was literally just a small flag on the side of the street that said start.

This time I stuck to my golden rule of race day and had my usual breakfast (unlike the donut I ate before the 25k). I ate my usual half a bagel with cream cheese and a banana.

At 7:30 am, the Bayshore Half Marathon began!

I ran this race with one of our friends from college who runs about the same pace as me. The course is absolutely beautiful because it runs along the peninsula in Traverse City. You run by the water the entire time, with a clear view of the beautiful water. In my opinion it is definitely one of the most beautiful races in Michigan – definitely worth traveling for! 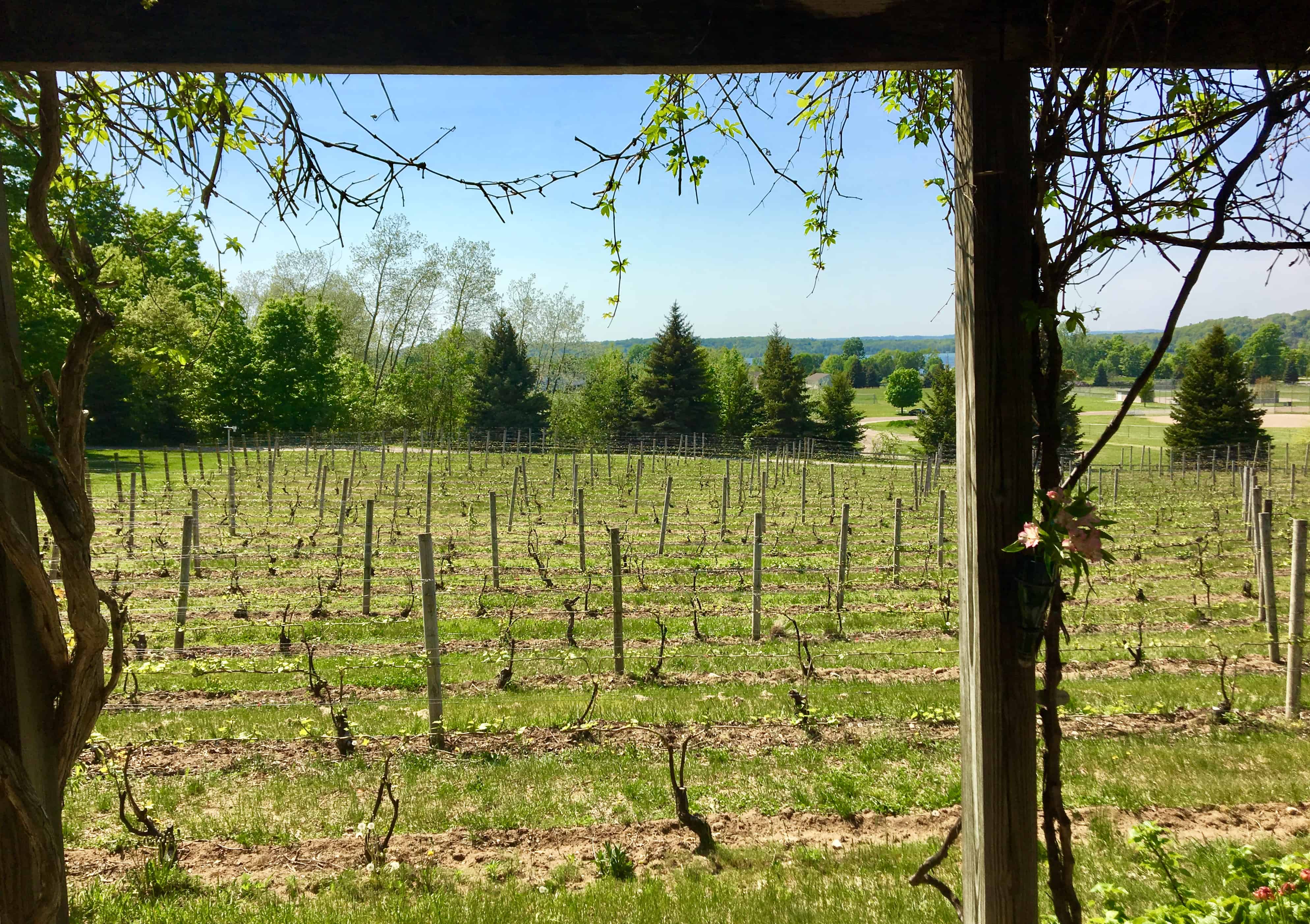 The weather forecast said we were supposed to get thunderstorms all morning but we really lucked out and had sunny skies! I couldn’t believe how different the weather was then what was predicted.

The race started at the bottom of a huge hill. My friend kept telling us this but I thought she was exaggerating – until I saw it! This hill was massive. The starting line was directly at the bottom of it so as soon as we started running we were going up. Luckily this hill was right in the beginning so it didn’t feel to difficult – but certainly felt long! We got to what I thought was the top of the hill, only to find out it turned and continued on. The hill was probably about a half mile in length, and after that there were a series of much smaller, rolling hills.

I felt great at the beginning and was a little nervous running with my friend thinking I’d hold her back, but it worked out perfectly. The first 6 miles absolutely flew by! I couldn’t believe how fast they were going. I kept thinking to myself that it was too good to be true.

The course ran right along the shoreline of Old Mission Peninsula, so even though it was hot there was an awesome breeze. The course was fairly shaded, but there were a few points that were completely in the sun and I could definitely feel the heat. Every once and a while we’d get a cool breeze coming off the water and it was wonderful. The temperatures were in the high 70s when we started but the humidity was 95%!

I took my first shot block at mile 6 and took one every other mile for the next three miles. I started drinking water right away at the aid stations because I felt so thirsty from the heat. The aid stations appeared every 1.5 or 2 miles which was awesome.

These miles flew by as well! I kept thinking this was too good to be true and expected to hit a wall, but there seemed to be none yet. We found another one of our friends on the course around mile 8 who was running his first half. It was fun to catch up and see how he was liking it so far! These miles continued to tick by really easily. 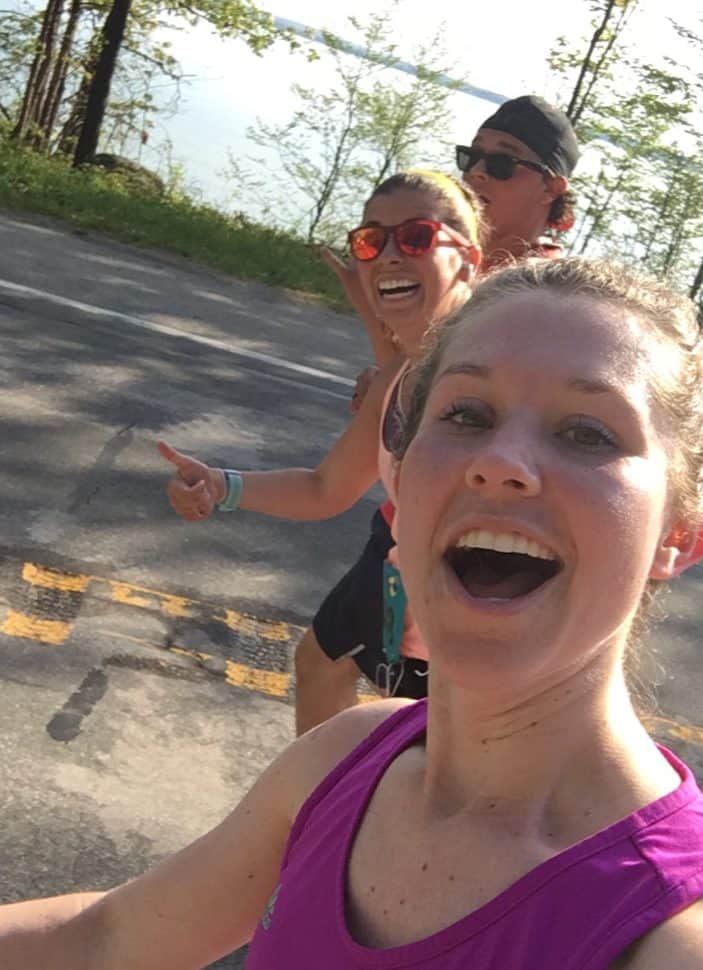 The heat really started to settle in around this point, and whenever there was no shade the sun felt really hot. There was a cold towel station around mile 8 which was exactly when I needed it. That cool water was an instant boost that kept going as the breeze blew for the next few miles.

Mile 10 started to get a little more challenging but was still not nearly as tough as I expected! The last three miles got significantly warmer as we left the peninsula and headed back towards the high school. Turns out that breeze was coming from the water so once we got away from it the air felt much warmer. 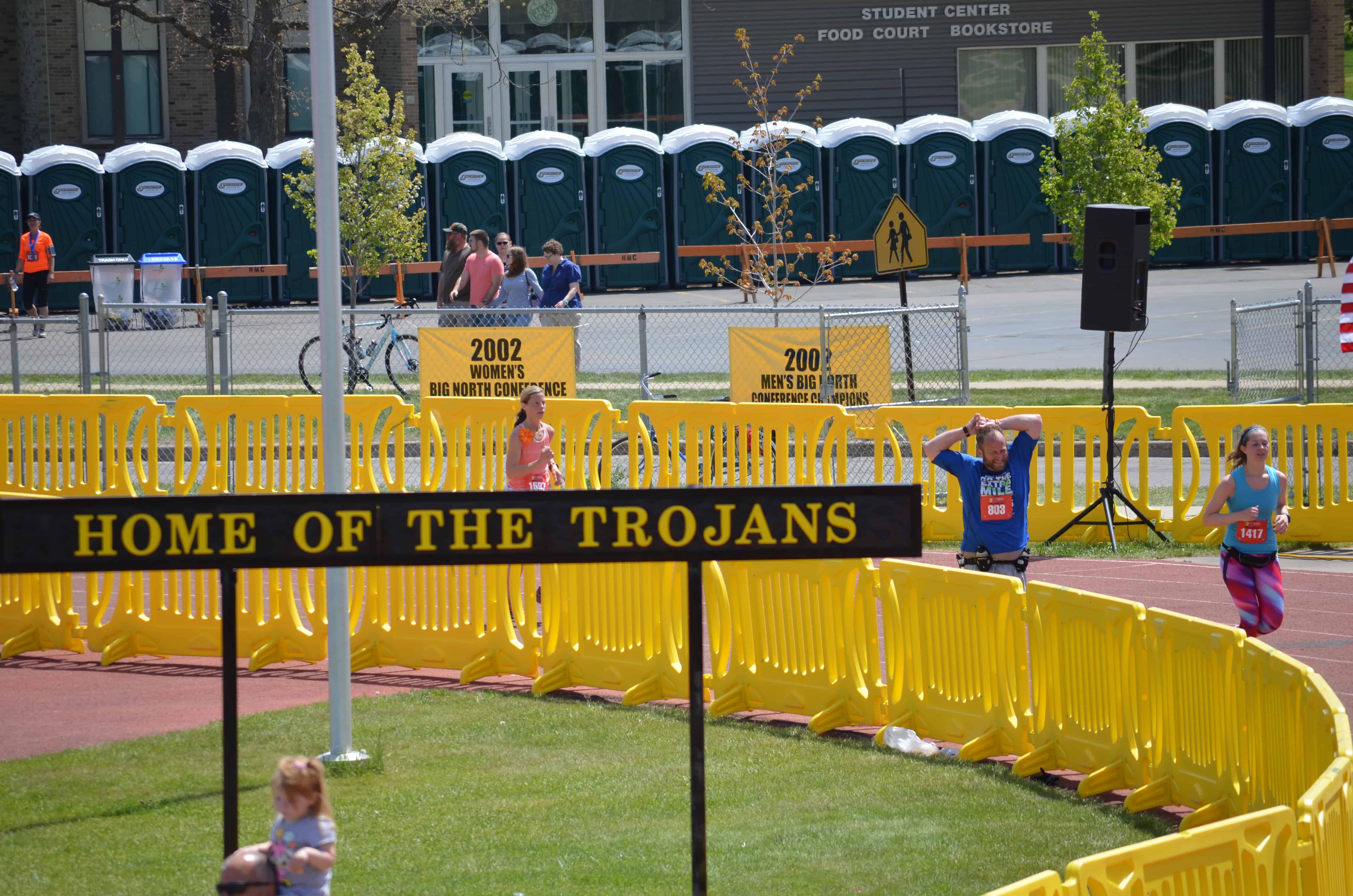 My friend and I lucked out and both had a great race on the same day. Neither of us had any issues and we were able to run consistently the pace for which we were hoping. It was nice to have a buddy to keep me accountable and help me from getting lazy and walking! We were able to finish the course without walking at all.

There was a beer station around mile 11 and the people there were so funny. I remember this station from mile 23 of the marathon in 2015 and felt so much better during this race than 3 years ago (also probably due to the fact that we had run 12 miles less at this point, haha). My friend grabbed some beer but I avoided it because the carbonation sounded like a bit too much while running.

We made it back to the high school and saw the start line, which I thought was the finish up until we crossed it. Turns out we had to turn out to the track and run an extra 200 meters – that was a bummer! At this point I was ready to be done but still felt like a had quite a bit left in me if I needed it. We finished and headed right into the finisher area! My husband was there waiting after finishing the 10k a little while earlier. 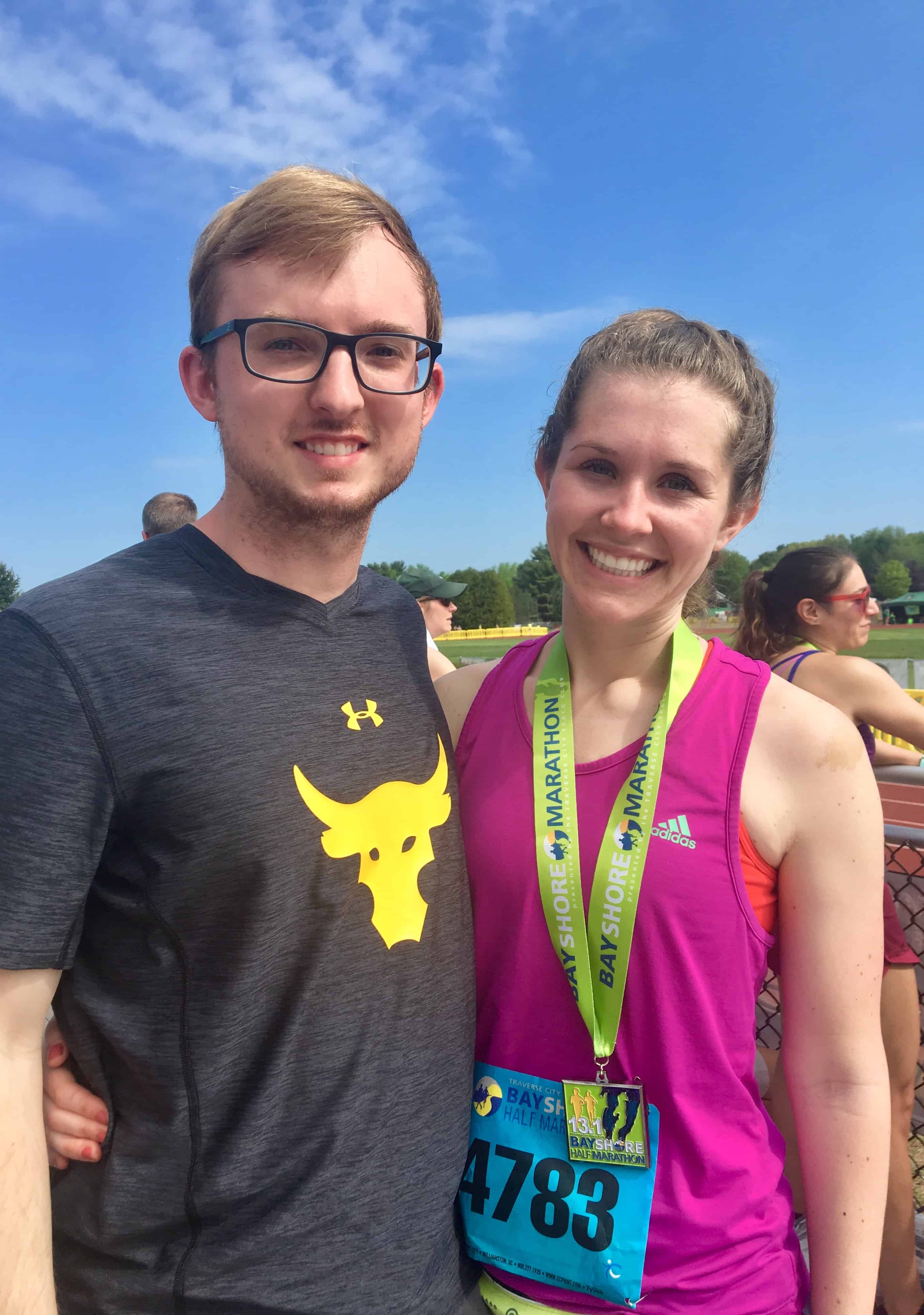 They served ice cream at the end which was wonderful. I am so happy with the race and glad that I was able to run the entire thing with my friend! Having a great race on the same day as someone else is rare, so we definitely appreciated it. We ran for fun and didn’t push the pace at all, but were both happy with our consistency.

Overall, this race turned out to be a great one. The weather held out and we didn’t get any thunderstorms until the evening. The weather was hot but it didn’t feel too bad running along the water! I feel so lucky to live in a state with places as beautiful as Traverse City. This is definitely a destination worthy race!

I am excited to take a few weeks of recovery and then get started increasing mileage again for the Rock ‘n Roll Half Marathon I’ll be running in Chicago on July 22nd!

The Best Spring Running Gear and Essentials | Runnin’ for Sweets

[…] discovered these sunglasses on accident last year after running a very sunny half marathon with a friend. While we waiting in the starting corral, I squinted miserably as she looked straight […]

[…] example, if I signed up for a half marathon in October, I would write this down in the calendar and then back track to June – when […]

Sounds like a great race--glad you got some ice cream there at the end ;). Also, you and your hubs are adorbs <3.

Thanks girl!! The ice cream really makes the run worth it ;) hope all is well with you!