Signing up for the Fifth Third Riverbank Run 25k back in the beginning of 2018 felt like a huge commitment. I was still in the midst of recovery from the New York City Marathon, winter was at it’s peak, and I was currently running no more than twice a week. The thought of increasing my mileage again seemed daunting, but I knew that setting a race goal was a way to get motivated again.

Related: Running Goal Setting that Will Make You Proud

There is nothing more motivating for me than signing up for a race and sticking a training plan to the front of my refrigerator. Following a training schedule helps me stay consistent and tackle new goals each week. My recovery from the New York City Marathon coincided nicely with the beginning of cold, snowy weather, but it also made the transition back to running a bit more sluggish. I knew I was in need of a race goal, and could think of no better race than the Fifth Third Riverbank Run. This run takes place in my favorite city (Grand Rapids, MI) and took place on my birthday (May 12th)!

I took the coincidence as a sign that I was destined to run this race, and signed up with my mom (who lives just outside the city). Signing up for a 25k was a great challenge – it pushed me just slightly past the half marathon level, but not enough to increase my training too much. I knew my “long runs” during this training plan would be shorter, but still long enough to push me to improve my fitness. The 15.5 mile race distance turned out to be the perfect fit.

All in all, training went pretty wonderfully. There were a few really rough weeks in the middle when I came down with the flu and had trouble recovering, but my body was able to resume training without losing too much fitness. This is the first time I’ve come down with an illness that’s made me miss more than a week of training for a race, but I’m proud of how I handled it. Aside from these few tough weeks, the rest of my training felt really awesome.

As race day approached, I began to obsessively check the weather. What started out as the perfect forecast (60s and sunny) slowly changed to rain, thunderstorms, and cold temperatures. I tried to force myself not to look at the weather until the day or two before the race, but that was easier said than done.

I wasn’t able to make it up to the race expo on Friday night so my mom picked up both of our bibs. I was a little bummed I missed out on all the running goodies they had but know that I will be back in the future!

Race morning began with a 5:30 am wake up call. I knew I’d question my sanity and regret signing up for this race when I was forced to wake up early on my birthday (also a Saturday!), but after a few minutes getting ready the excitement began to set in. Luckily the race start is located just about 20 minutes from my parents house, so we didn’t have to leave too early. My mom and I set out for downtown Grand Rapids at 6:00 am.

Our race didn’t actually begin until 8:30 am, but with the 5k starting at 7:00 am we knew streets would be closing and parking would be tough if we left too late. We decided to leave early to get a close parking spot and just hang out downtown before our start time. 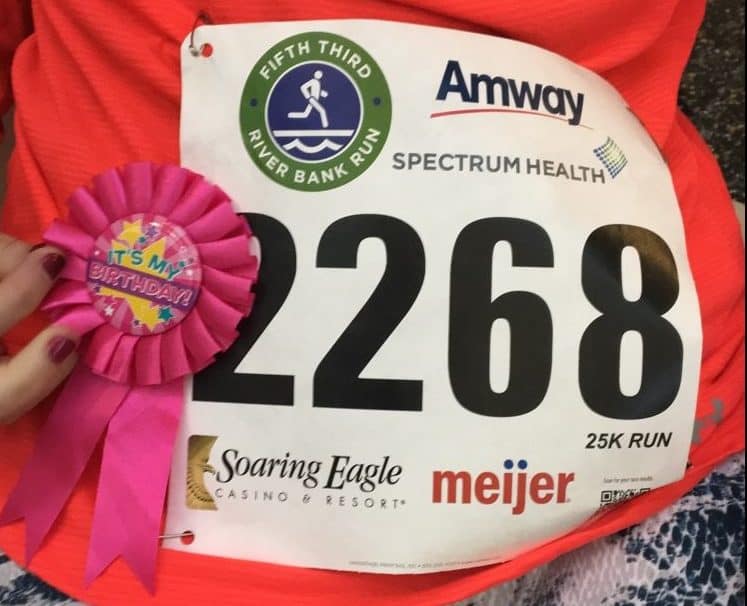 After two complete rest days, I was feeling confident and excited for this race. I decided to break my own rule (so foolish!) and have a donut for breakfast instead of my usual pre-race breakfast of a bagel. I knew as soon as I started eating it that I’d made a mistake! I think I let the excitement of my birthday get the best of me but regretted it right away. I could feel all the sugar settling in my stomach and hoped that it wouldn’t cause any stress during the race!

I tried not to check the weather too obsessively leading up to the race, but realized the day before that race morning was going to be quite awful (weather-wise). After weeks of warm, sunny, 70 degree weather, race day had a high of 43 degrees and 90% chance of rain and thunderstorms. Ugh. It felt colder outside than I expected, but luckily the thunderstorms we got the night before ended and it was just cloudy at the start.

We waited inside the convention center until the last minute and then headed out to the start around 8:20. This race has been an annual tradition for the city of Grand Rapids for over 40 years, and is always a huge event. There is a 10k and 5k as well, so the downtown was booming with runners and spectators. My favorite! 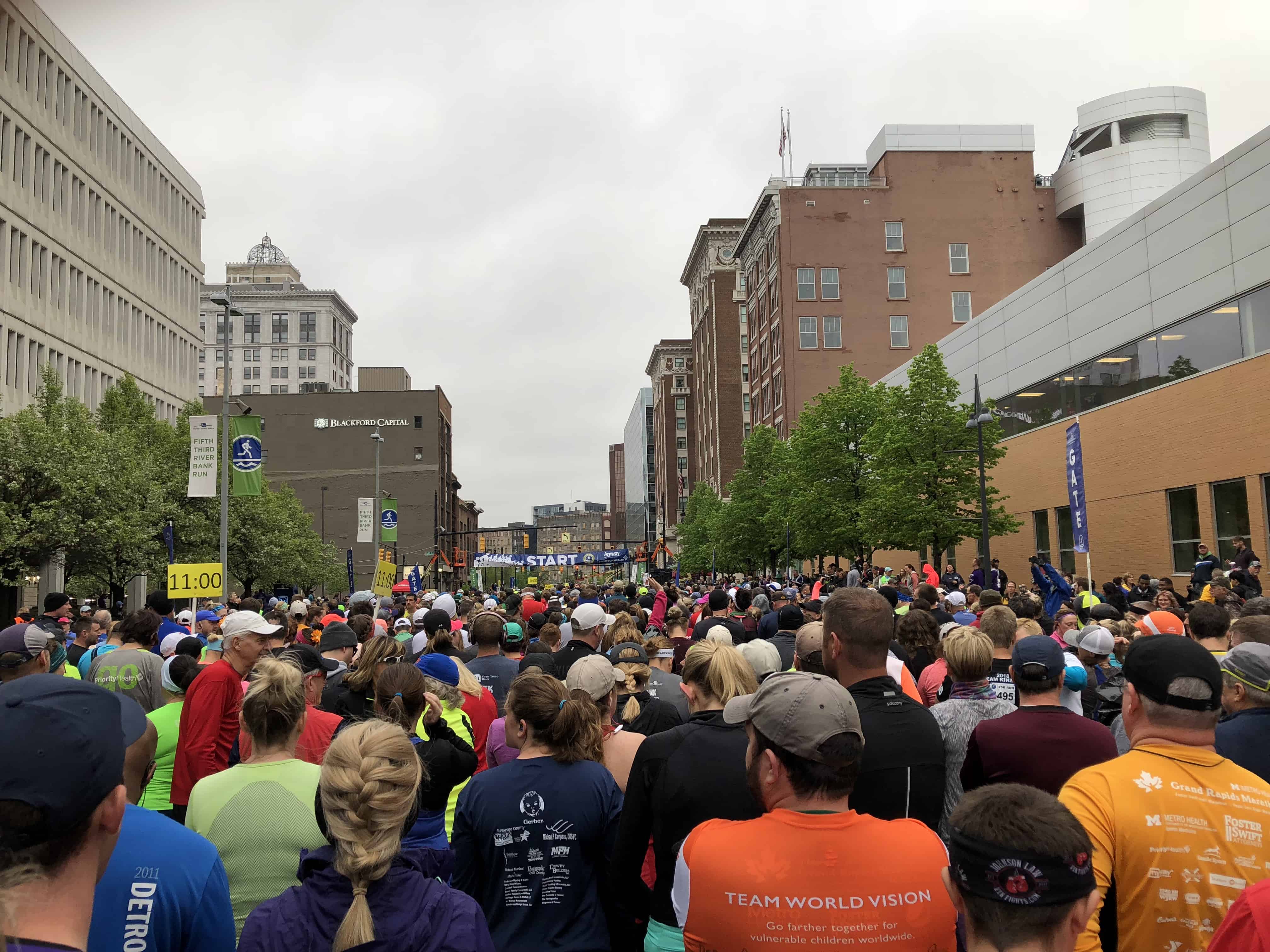 At 8:30 am, the Fifth Third Riverbank Run began!

I couldn’t believe how quickly the beginning miles were passing. My stomach felt a little off in the first few miles after eating that donut and I worried that I might have made a huge mistake, but it settled down around mile 3. I had a really big headache at the start that never went away, but luckily it wasn’t too much of a pain unless I focused on it. It took me about 4 miles to really get in the groove, but by about mile 4 I was feeling really good. The course ran out of the downtown area right away and we didn’t get too many hills in the beginning which was a nice surprise.

By mile 6 I was fully in my running groove and taking everything in. This part of the course took us through a beautiful park, along the river and through a bunch of trees. The street was gorgeous and I can only imagine what all the colors look like when it’s sunny! We started to see a few more hills in this section but I was still feeling really strong. When we turned around to head back to town around mile 8 we discovered that we were running directly into the wind which made things feel a lot colder!

I started taking race fuel at mile 7.5 right around the halfway mark. I brought both the waffles and shot blocks and decided to go with the shot blocks since they’d be easier to take in slowly. I took my first shot block right before an aid station, which worked out perfectly. We both made sure to grab water or gatorade at each of the aid stations after mile 6 (they were on the course ever 1.5 miles). The fuel worked great and I could feel an instant boost each time I ate one! In total I had 4 shot blocks and 3 different cups of gatorade.

. You can check them out here

This race distance really messes with your head because it’s so close to a half, but when you’re running it those extra 2.5 miles feel like forever. Around mile 10 I started to realize that we still had 6 miles left. The course mile markers were about .2 off from my watch, which was a little depressing too. Each time our watches beeped we looked up to see that the mile markers were still way up ahead!

It started to rain right around mile 11 and rained pretty steadily for almost a mile! The rain really added to the chill that was in the air, but thankfully it didn’t last too long. My mom didn’t have her usual fuel, so she started to run out of energy in the last few miles which forced me to try and stay strong mentally. The hills felt significantly more challenging near the end, but we powered through and made it! 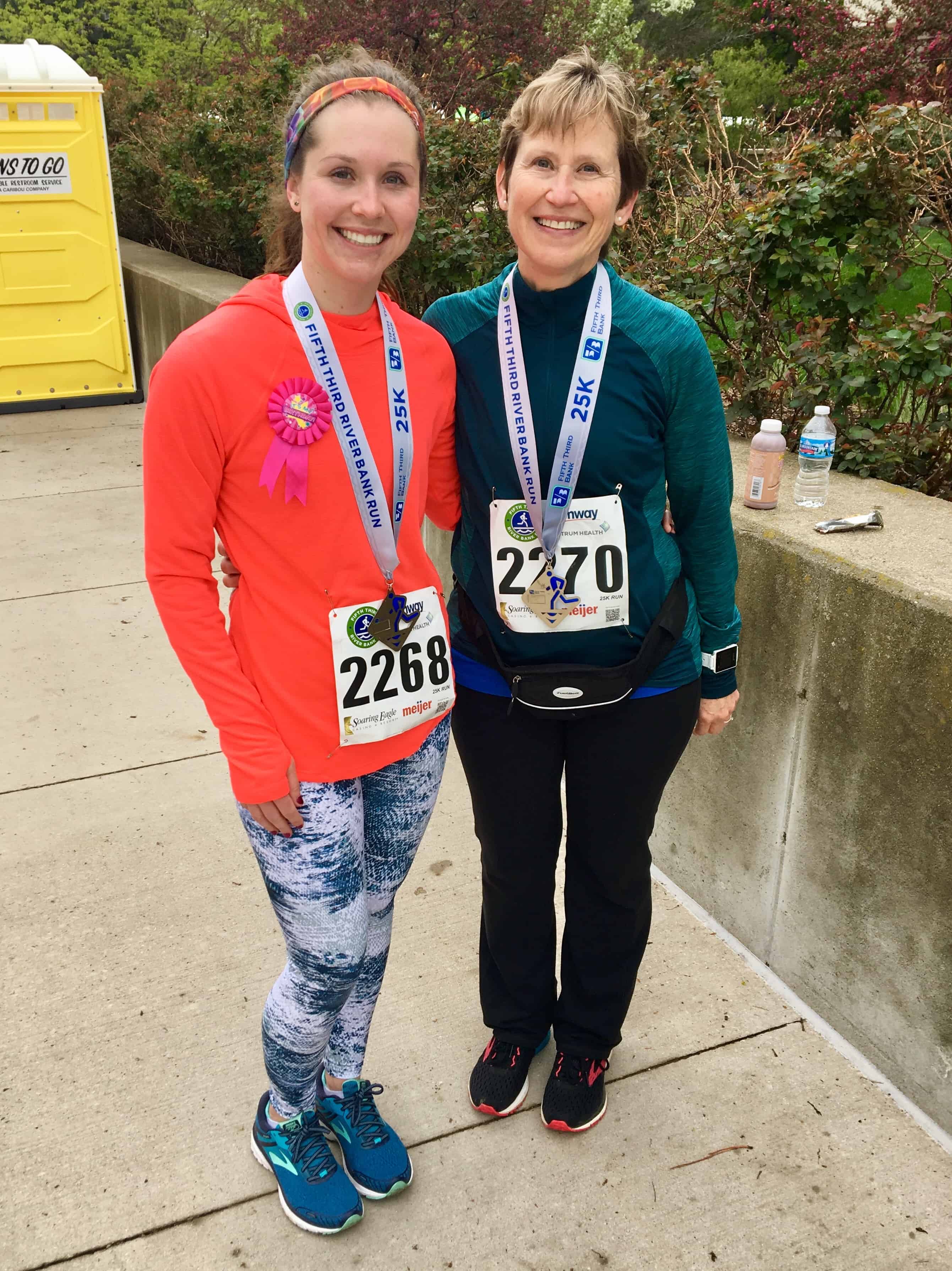 Overall, this race was so well organized and the course was beautiful. This was the perfect sized race for me because there were always people around, but it never felt too crowded. One of my favorite parts of the race was the fact that they gave out blue Gatorade and didn’t water it down! It seems that most races hand out green or orange Gatorade which is definitely not my favorite, so finding out they had blue was a great surprise. The logistics were so easy, and having a convention center to wait in near the start made the morning so much less stressful. I loved the vibe here, even in the cold dreary weather! This was a great race and I couldn’t think of a better way to kick off my birthday. 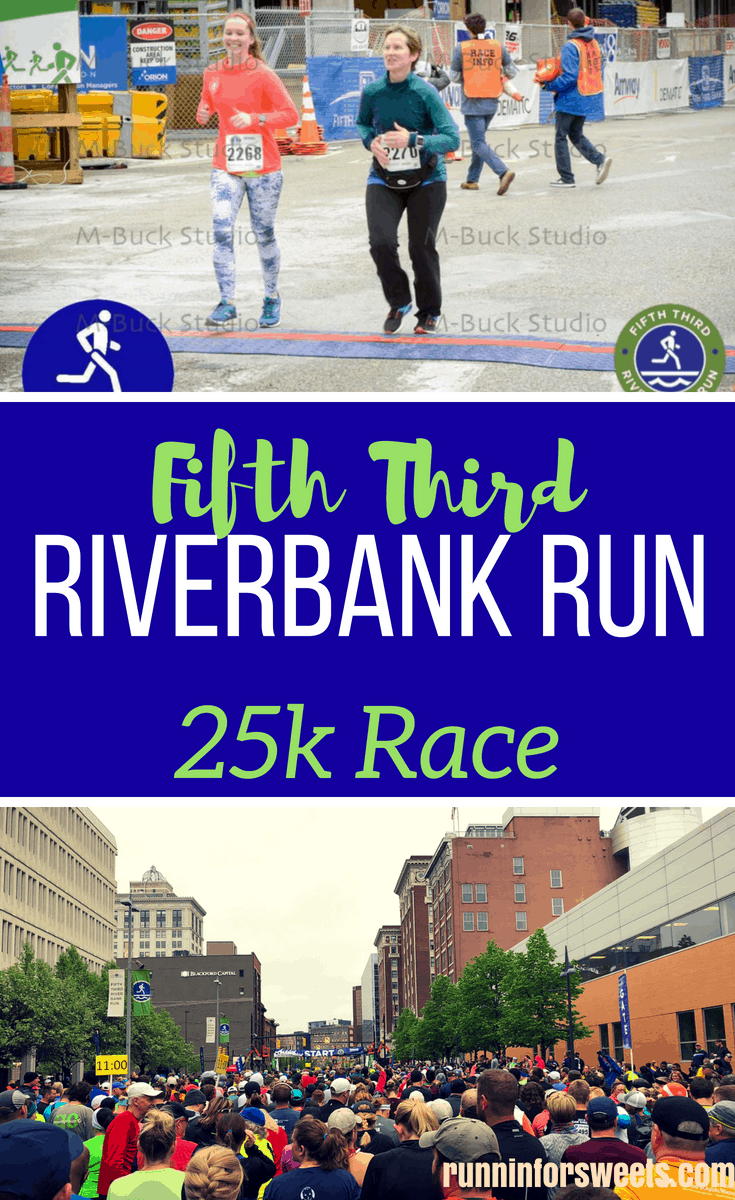 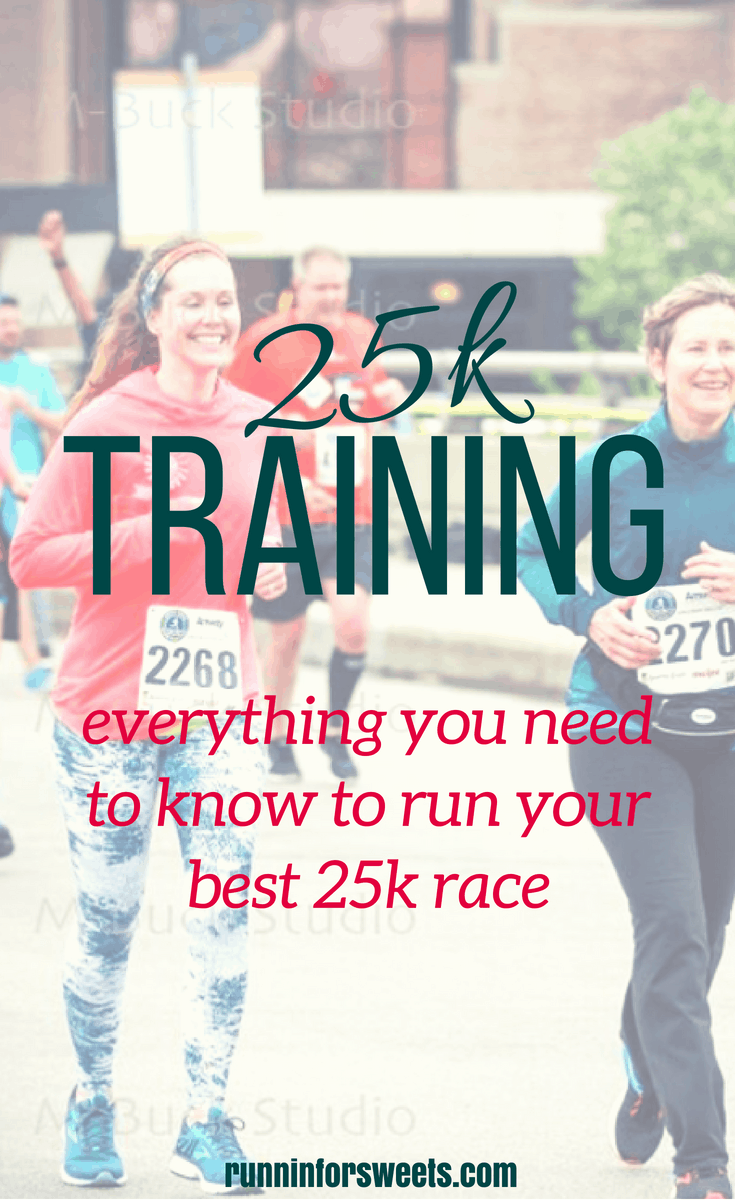 […] first stumbled upon running lower mileage this past winter, as I began to train for a 25k in the spring. I was struggling to find a balance between maintaining my health, battling the winter storms, and […]

[…] wanted to do next. I decided to train for some mid-distance races in the spring, and completed the Fifth Third Riverbank 25k as well as the Bayshore Half Marathon in […]

[…] race way back in the winter, but its training took a bit of a back burner as I prepared for the Riverbank Run 25k which took place two weeks ago. I figured that since I was already training for a 15 mile race, […]