Just over a month ago, I decided that I was done feeling like crap and experiencing constant symptoms from autoimmune disease. My joint pain continued to flare up more frequently, my temperature seemed to spike every few weeks, and my energy level was at an all time low. Despite my love of ice cream and belief that it’s possible to stay healthy when consuming treats in moderation, I figured it was time to try something drastic.

Here’s what I did: I went paleo for one month.

After a few visits to a functional health doctor and tons of research, I was given a recovery plan very similar to what I had anticipated. Unlike previous doctors who had prescribed medication on top of medication, this recovery plan involved something very different: food.

Related: My Journey with Running and Autoimmune Disease

My functional health doctor prescribed me a few supplements – one for inflammation, a probiotic, and powder meant to heal leaky gut – along with a drastically different diet. After giving up sugar for 40 days earlier this year, I was skeptical as to how much food was really influencing my body.

While I noticed quite a few differences when I quit sugar for 40 days, reduced joint pain was not one of them. Throughout my time without sugar my joint pain continued to flare, just as it had with those daily bowls of ice cream. 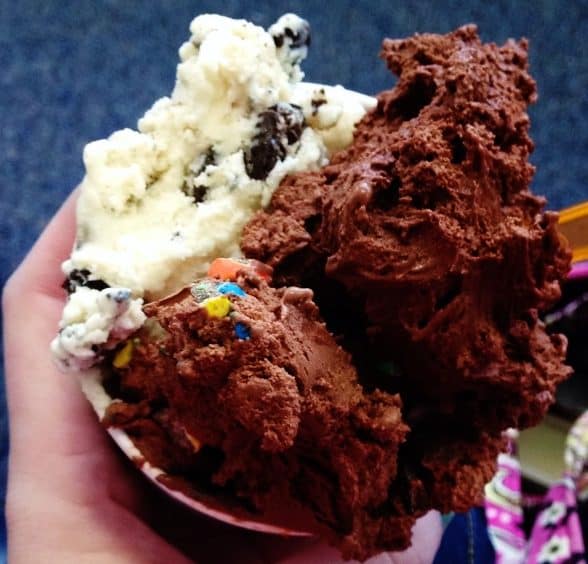 Related: What Happened When I Quit Sugar for 40 Days

Even so, I felt motivated and willing to give this paleo diet plan a try. The prescribed diet not only eliminated sugar, but it also prohibited dairy, gluten, and limited fruits or gluten-free sources of carbs. My biggest worry heading into this new paleo diet was whether or not I would be able to continue running successfully with such a limited amount of carbs.

My dietary guidelines were very similar to the paleo diet.

What my doctor prescribed was a bit stricter than most paleo guidelines (limiting fruits and gluten free breads or pastas), but I ultimately decided to be a little more lenient and follow the paleo guidelines in order to consume a bit more carbs.

It’s no secret that I love to treat myself to desserts and treats, especially during marathon training, so this diet was a huge adjustment for me – to say the least. However, as I prepared for the new way of eating, I still expected it to be an easy adjustment. 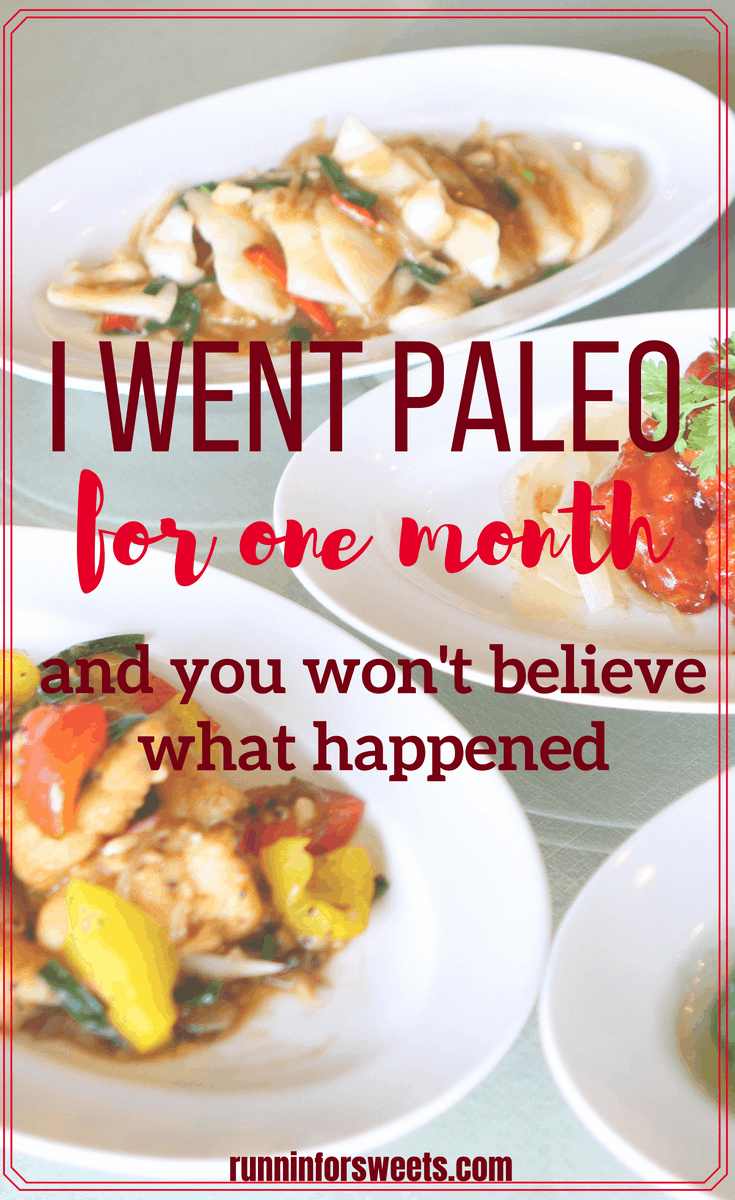 Here’s what happened when I went paleo for one month.

As I returned home from my appointment with a brand-new diet plan, I decided to wait out the weekend and start fresh on Monday. My appointment took place on a Thursday, so I wanted to give myself time to clean out the cabinets, buy fresh food, and indulge one last time.

Related: 5 Ways I Plan to Overcome My Sugar Addiction

My husband was a trooper and decided to change his ways and start the paleo diet with me as well – and thank goodness he did, since it would have been nearly impossible to keep going while watching him eat all the foods I love! We spent the first weekend throwing away pretty much everything in our refrigerator and cupboards. Even the chicken and meats had to go because they were not organic.

While it was a little disheartening to throw away so much food, it was exciting to think of what a big change we would be making. We meal planned, grocery shopped and stock the fridge with brand new foods for the upcoming week.

When Monday approached, I found myself coming down with a fever. My stomach was completely off and I was more motivated than ever to find a fix for these symptoms. However, as I walked downstairs to make breakfast, I grew increasingly more discouraged as I realized my breakfast would consist of just an egg.

I really struggled to eat paleo for the first few days.

It took almost two hours to prep the salad I planned to eat for lunch, which only made me more frustrated. Feeling tired from the fever made the transition even more challenging, as my lack of excitement combined with lack of energy made creating meals feel like an incredible chore. 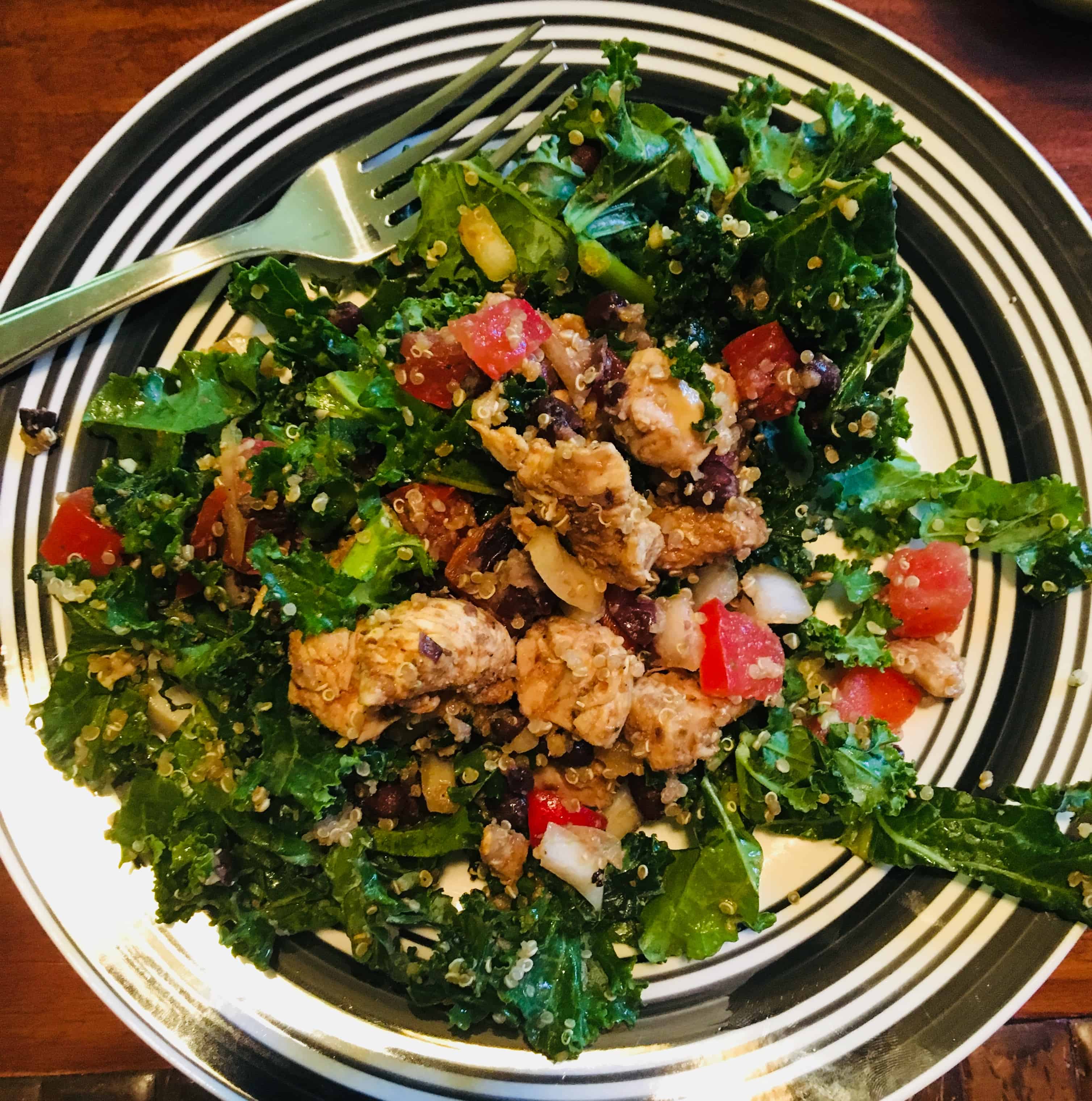 The first three days were the absolute worst. They dragged on and there seemed to be no light at the end of the tunnel. On day three, we headed up north for a long weekend of camping. I knew this trip would be a challenge, given that we normally indulge in smores and mac and cheese while camping and hiking. To avoid a setback, we prepped all of our camping meals ahead of time – right down to the eggs we’d have at breakfast.

I was surprised that eating this food while camping didn’t feel too challenging. We kept ourselves busy and didn’t have to spend time cooking while sitting at our campsite.

My breakthrough came on day 4 of going paleo, after a long hot hike through the dunes.

We were sweating, tired, and constantly driving by ice cream and pizza shops. All we wanted to do was splurge.

We stopped to get gas and inside I unintentionally found my savior: Skinny Pop. This popcorn was gluten free and dairy free, but tasted delicious. It sounds silly, but finding this popcorn helped me see that there are still plenty of foods I can eat – I just might have to look a little harder to find them. 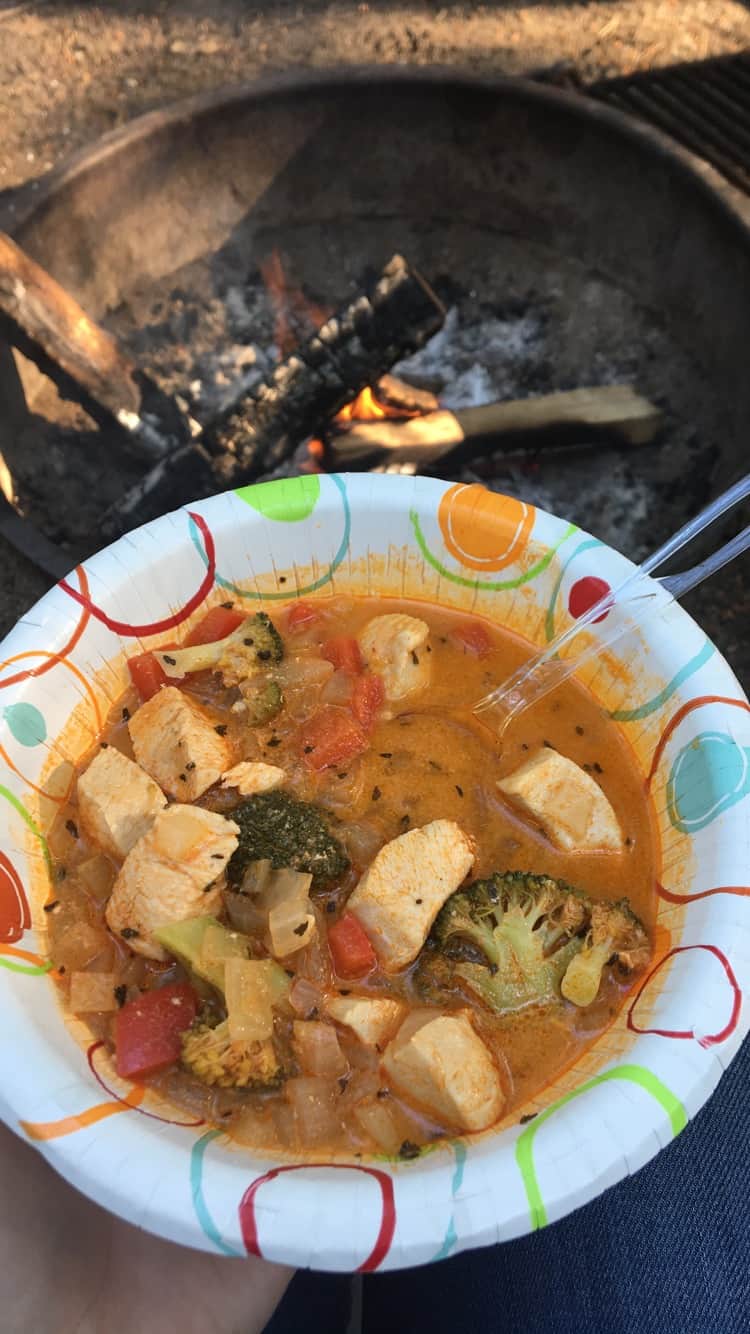 After week one, eating paleo got exponentially easier.

We bought dark chocolate and I discovered that the recommended limit of 1 ounce was actually quite a bit. I found a recipe for paleo breakfast muffins and covered them with my daily 1 tablespoon of honey. Kale started to taste a lot better after the first few days, and I suddenly found myself looking forward to the salad at lunch.

We discovered alternatives to pasta in quinoa and brown rice, found a love for balsamic vinegar, and continued to buy Skinny Pop in bulk. This new normal felt a lot easier to maintain, and all was well when we were at home in the routine.

That’s not to say there weren’t challenges. After the first few weeks, life got a little busy and we found ourselves out and about during meal times a lot more frequently. We went to a backyard party at a friend’s house, and eating soup while everyone else cooked smores and hot dogs was rough. But I made it.

After the first two weeks, my husband started to bring back a few foods that he loved and I found easier to avoid. I felt stronger now, even on my own, and proud to be filling my body with such nutrient dense food.

After 30 days of eating paleo, here’s what happened to my body:

Unfortunately, my joint pain continued to persist throughout this paleo experiment. 30 days is really such a short time to discover any major healing, so I’ll be curious to see if these symptoms fade with time. It turns out that what I expected to happen (joint pain ending) didn’t, but everything else that I didn’t know was wrong in the first place was fixed.

It took only about 5 days to feel results from going paleo.

I felt energetic, more regulated and satisfied after eating. I was so surprised by how quickly I experienced results – but those first 5 days certainly were not easy.

If you are thinking about going paleo, my biggest advice is to push through the beginning. Understand that making such a dramatic change is going to have a profound impact on your body, and the first few days will feel miserable – but just because those first few days feel awful doesn’t mean that’s how it’s going to be forever.

Push through the tough times knowing that you will be stronger for it. Making these changes may not seem like a big deal, but ultimately what you eat affects your entire body. Changing your mindset to focus on viewing food as fuel rather than a treat is challenging, but the impact is profound. 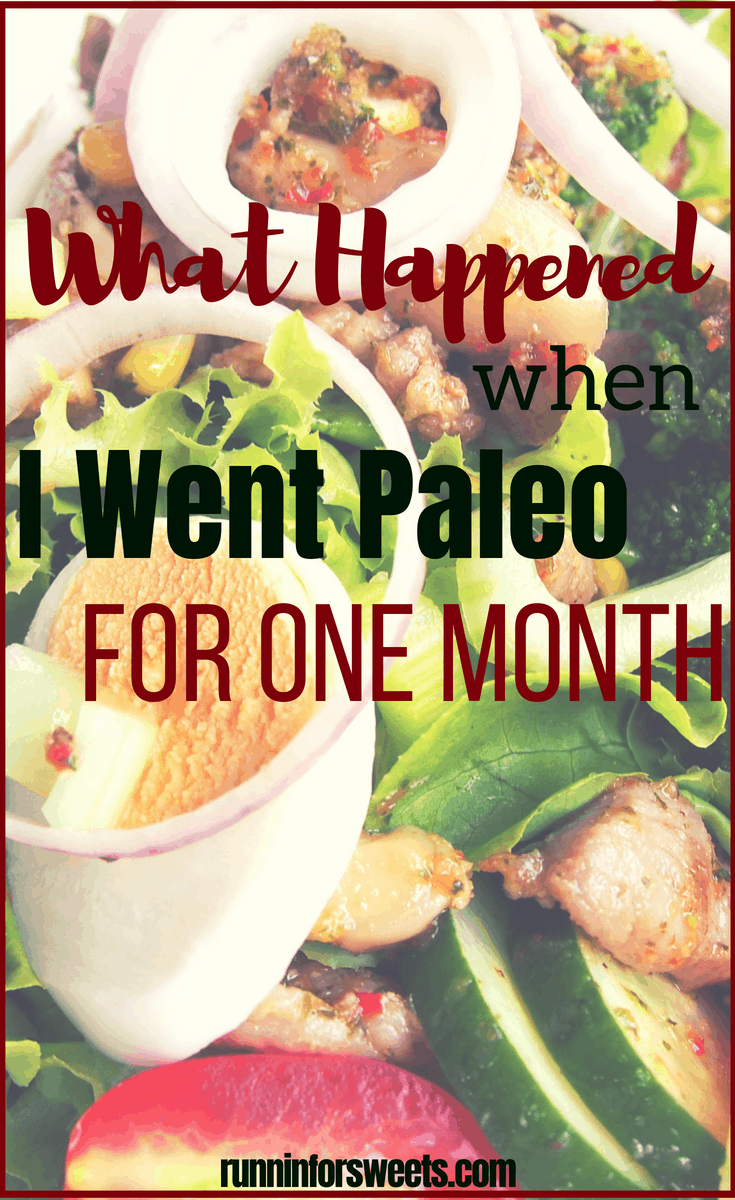 Try cutting out corn to stop the joint pain. That was key to my lingering symptoms after years of Paleo. No more Skinny Pop — sorry! ;)

@HW, I agree. Also night shades, and if any “vegetable” or seed oils. AIP is a more strict version. It’s meant to see if you get feeling better then add foods back in to pinpoint culprits. It’s a challenge!

[…] moods, and just lead healthier lives. But, it seems like everybody is talking about difficult and complex diets that require insane timing, professional architect-level measurements, and ingredients that cost a […]

6 Tips for Creating a Healthy, Fitness Lifestyle | Runnin’ for Sweets

[…] Related: What Happened When I Went Paleo for One Month […]